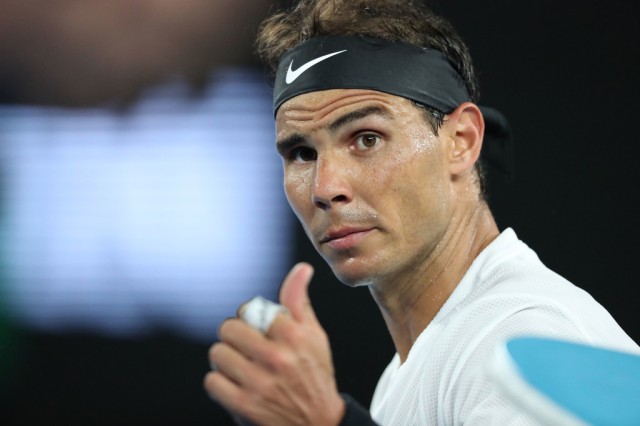 With a shot against Roger Federer in the Australian Open final up for grabs, a resurgent Rafael Nadal and an upstart Grigor Dimitrov will vie against each other for the coveted spot in today’s semi-final. Nadal last played a major final in the 2014 French Open, and after a series of ailments and injuries, he has silenced the critics who felt whether the Spaniard has it in him to make another major final.  Dimitrov, famous for reasons other than tennis; he was the ex-boyfriend of Russian superstar Maria Sharapova; is yet to win a major despite having oodles of talent. Nadal leads the head to head record 7-1 and 1-0 in grand slams (2014 Australian Open quarter-finals). The pair last played in the China Open quarters, where Dimitrov won 6-2,6-4 to eke out his first victory. The Bulgarian is on a roll this year, having won the Brisbane International and 5 successive matches in the Australian Open. With young legs and an aggressive approach, he should give Nadal a run for his money.

The first set started strongly for Dimitrov as the Bulgarian starts hitting the ball strongly to run up 0-30, forcing a couple of unforced errors on Nadal’s forehand. He couldn’t convert a break point and Nadal holds his serve to set the ball rolling. In the fourth game Nadal breaks with a whipped forehand pass to go up 3-1. Nadal then cruises through the set winning 6-3. Though both won a total of 20 points, Dimitrov’s 7 unforced errors did him in. He would have rued not able to convert the break point that was on offer in game one. The second game started strongly yet again for Dimitrov as he held his serve and broke Nadal’s serve for the first time in game four to go up 3-1 and hold his next service game. Both players trade break of serves. Dimitrov goes up 6-5 and Nadal serving to stay in the second set loses focus to hand over the set to the Bulgarian 7-5 and one set apiece. What a set it turned out to be for Dimitrov. In the third set, Nadal takes the initiative in game five as a forehand on 30-40 from Dimitrov sails long to hand Nadal the break. But Dimitrov breaks back to be back in the match at 3-3. There are no further breaks and the set goes to a tie breaker where the Spaniard wins handsomely 7-5.

The set takes one hour and ten minutes. The fourth set starts after two hours and fifty minutes of pulsating tennis. Can Nadal close the issue in four sets or will Dimitov take it to the fifth set. The set had its up and down. Rafa was strong with his returns and backhand       winners from the base line while Dimitrov is tenacious, mentally strong and willing to suffer. Both the players take their chances but are unable to break their opponents defences. Games go on serves and it is tie breaker in set four. Dimitrov turns the tide this time and takes the tie braker at 7-4. We are on to the deciding set.

The opening game of the fifth set lasts 13 minutes as Nadal squanders 3 break point opportunities to break serve. Dimitrov is now starting to believe in himself that he could turn it around. Game two saw the longest rally played where 29 shots were traded, Nadal winning eventually. One game all. The game goes on serve and in the ninth game Nadal gets the most important break of the match and he duly completes the formalities in 4 hours and 56 minutes on the third match point to meet Federer for a dream final on Sunday.